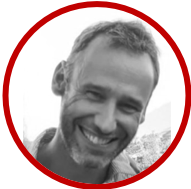 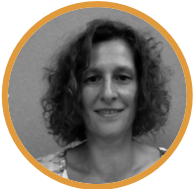 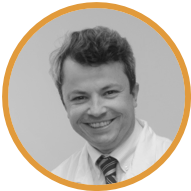 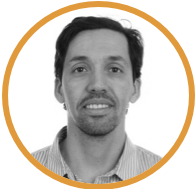 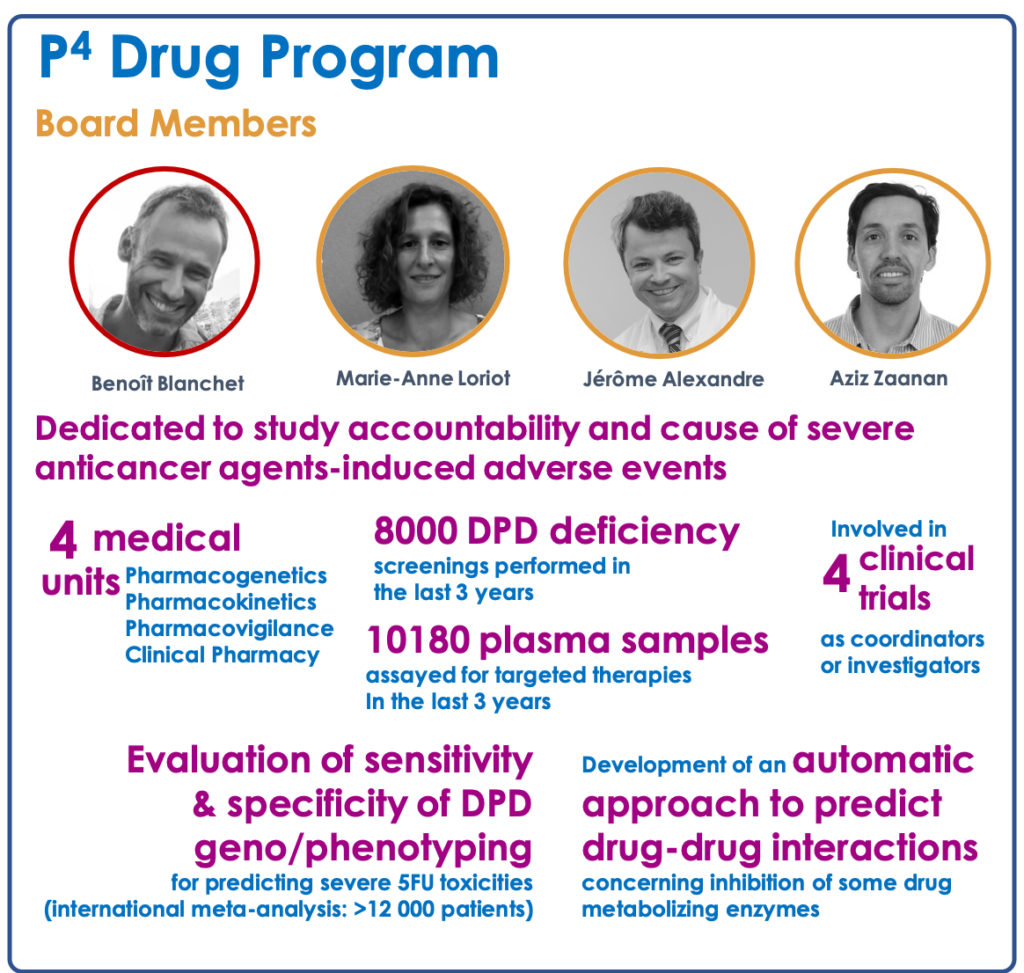 CARPEM Institute has a strong activity to better understand pharmacological basis of interindividual variations in clinical effects of anticancer drugs. For this purpose, 4 units are involved among the three hospitals of APHP.Centre: Pharmacogenetics (HEGP), Pharmacokinetics (Cochin), Pharmacovigilance (Cochin) and Clinical Pharmacy (HEGP, Cochin and Necker). These units work in close cooperation with oncology medical units.

The strength of our organization is currently based on pharmacogenetic and pharmacokinetic approaches complementary developed in 2 sites and on a strong activity in clinical pharmacy. In one hand, the biochemistry laboratory in HEGP is the most important in Paris for the research DPD deficiency (including genotyping and phenotyping analysis) in cancer patients before treatment with fluoropymidines. The French authorities have recently recommended DPD screening in patients before treatment with fluoropymidines. During the last 3 years, the biochemistry laboratory in HEGP performed about 8000 thousands of DPD deficiency screenings for the Great Paris area. Besides, it performed also genotyping tests for different cytochromes P450 (CYP3A4/5, 2D6) contributing to the metabolism pathways of anticancer drugs, as well as for efflux proteins involved in both their absorption and elimination steps.

In the other hand, the clinical pharmacology laboratory in Cochin hospital is able to assay plasma concentrations of 26 oral targeted therapies and monoclonal antibody immunotherapy such anti-PD1. During the last 3 years, 10180 plasma samples were assayed for targeted therapies (n=9089) and anti-PD1 antibody (n=1091), respectively. This activity of therapeutic drug monitoring represents about 70% of that recorded in the Great Paris area. Overall, the clinical pharmacology laboratory of Cochin is a national reference for drug monitoring of targeted therapies regarding activity, pharmacological and clinical expertise in the field.

Furthermore biologists, physicians and clinical pharmacists daily work together to optimize daily dosing of targeted therapies and chemotherapy drugs in the three sites of CARPEM institute. Clinical pharmacists look for all kinds of drug-drug interactions (pharmacokinetic, pharmacodynamic) including over-the-counter drugs and complementary and alternative medicines. This activity of clinical pharmacy is present on three sites (Cochin, HEGP and Necker). All severe adverse events related to anticancer drugs are reported to the regional center of pharmacovigilance (Cochin). Overall, these different structures (pharmacogenetics, pharmacokinetics, clinical pharmacy and pharmacovigilance) share their expertise to investigate both the accountability and the cause of severe anticancer agents-induced adverse events in adult patients.

The P4 Drug Program aims to become a French leader in understanding pharmacological basis of interindividual variations in clinical effects of anticancer drugs.

According to an approach of personalized medicine, the platform of pharmacokinetics/pharmacodynamics of anticancer agents (Cochin) aims to optimize the balance efficacy/safety and therefore to identify the best active and safe dosing schedule for individual patients to maximize therapeutic benefit.

Since 2010, our teams has worked on the influence of clinical, biological and genetic determinants on the inter- and intra-individual pharmacokinetic variability of drugs, as well as on the relationship between drug plasma exposure and clinical outcomes (efficacy, toxicity). For this purpose, the clinical pharmacology laboratory (Cochin) developed several analytical methods using liquid chromatography (mass spectrometry, UV or fluorescence detection) to assay plasma exposure of kinase inhibitors such EGFR, BRAF and VEGFR inhibitors. Recently, an ELISA method was validated for the quantification of plasma concentration of nivolumab (anti-PD1) (Puszkiel et al., 2019). Validation criteria for all these analytical assays follow guidelines from the Food and Drug Administration and European Medicine Agency. We provide bioanalytical capabilities for Phase I-IV trials and pre-clinical studies. Overall, these different analytical techniques support the investigation of PK/PD relationship for targeted therapies and immunotherapy. For example, we showed that increased plasma drug exposure is associated with better response or survival for drugs such as abiratetone and vemurafenib (Blanchet et al. 2018; Carton et al., 2017; Kramkimel et al., 2016).. Given the existence of PK/PD relationship for some anticancer agents, identification of determinants involved their pharmacokinetic variability is mandatory. Thus, we reported the role of lean body mass and pharmacogenetic variants on the pharmacokinetics and pharmacodynamics of sunitinib (Narjoz et al., 2015). We also explored the effect of clinical parameters such as age, body composition or overweight on severe toxicities of anticancer agents (Beinse G et al. 2016, Bretagne et al. 2017). In regard with the high polymedication of cancer patients, pharmacokinetic drug-drug interactions represent a significant determinant in the pharmacokinetic variability of anticancer drugs. The strong relationship between clinical pharmacists and pharmacologists allowed us to highlight different pharmacokinetic drug-drug interactions with erlotinib, osimertinib or sunitinib (Mir et al., 2011). Finally, one specify of our clinical pharmacists is their great knowledge of complementary and alternative medicines. In this context, we could also identify some pharmacokinetic interactions such as erlotinib and red wine extracts (Fabre et al., 2017).

The pharmacogenetic approach is essential to identify variants which can alter the metabolism of anticancer drugs and therefore prevent early severe toxicity or inefficacy. Since 2000, the unit of pharmacogenetics in the clinical chemistry department (HEGP) has developed genotyping and phenotyping tests in order to personalize therapies especially for anticancer drugs, antithrombotic, immunosuppressive drugs. In this context we propose to physicians to integrate specific analyses to anticipate toxicities and better select individual drug dose. Our laboratory developed both molecular analyses and measurement of enzymatic activities (. More than 1500 genetic tests and more than 3000 phenotyping tests were performed in 2018, and around 60% are dedicated to anticancer drugs (fluoropyrimidines, irinotecan, thiopurines, tamoxifen…). M-A Loriot participated as pharmacogenetics expert in the recent publication of INCa/HAS recommendations for the screening of DPD deficiency before fluoropymidines therapy (December 2018) (source HAS, 2018).  In line with this, she was recently nominated as ANSM expert for European agency in order to discuss about the generalization of the DPD screening in all European countries (in progress). Furthermore, M-A Loriot co-founded the French national network of pharmacogenetics (RNPGx) in 2008 and is the president of the RNPGx since 2015. As a member of RNPGx M-A Loriot published updates on pharmacogenetics and recommendations to improve the implementation of pharmacogenetics in routine practice (Etienne-Grimaldi et al. 2015; Woillard et al. 2017; Loriot et al. 2018).

The group of M-A Loriot (INSERM UMRS-1138, Personalized Medicine personnalisée, Pharmacogenomics et therapeutic optimization) has published more than 40 papers during the last 4 years and is involved in many research protocols integrating pharmacogenetics, in particular for clinical studies in collaboration with the French Federation of Digestive Cancerology FFCD  (Manfredi S et al. 2015; Lecomte T et al. 2019 www.fffd.fr). Our group works with the HEGP informatics department (Pr A. Burgun team) to perform PheWAS studies in order to correlate pharmacogenetics traits and patient phenotype (including biological or clinical data) based on a local clinical data warehouse (Neuraz et al 2013). M-A Loriot coordinated a research program included in the project FUSAFE (2014-2018) granted by a national PHRC to perform two national surveys of professional practice in relation with DPD screening among biologists and oncologists (Loriot et al. 2019).  This program includes also an international meta-analysis including more than 12 000 patients to evaluate the performances (sensitivity, specificity) of DPD genotyping and phenotyping for predicting severe 5FU toxicities (manuscript in preparation). A FUSAFE-3 program is under evaluation in the last PHRC call in order to evaluate the impact of the new recommendations concerning the screening of DPD deficiency before FU treatment in France. Since 2018, the unit of pharmacogenetics of HEGP has been integrated in the PREVITOX network in the context of an ANSM grant to establish the first network on drug toxicology “from basic science to clinical studies “. M-A Loriot coordinates with the team of Bastien Rance (Bioinformatics, HEGP) the axis of pharmacogenomics and big data.

The clinical pharmacology laboratory at Cochin Hospital is linked to two research Inserm units. First, the CNRS UMR 8038 / U1264 INSERM unit (“Medicinal Chemistry and Translational research) is specialized on targeted therapy, studying signal transduction pathway and on translational research. The team has expertise in chemistry, biology and bioinformatics. One of our aims is to develop an automatic approach to predict drug-drug interactions concerning inhibition of drug metabolizing enzymes cytochrome P450 2C9 and 2D6 and phase 2 drug metabolizing enzyme sulfotransferase (SULT 1A1, and SULT 1A3). In term of translational research, we aim to identify biomarkers of response and/or resistance in patients treated by targeted therapy or immunotherapy. We have developed, in collaboration with Pamgene® society, the approach of kinome study. This allowed us to study two molecules: sunitinib in renal cancers (Noe G et al., 2016) and nivolumab in lung cancers (Noe G et al., 2019), both in collaboration with Pr F. Goldwasser department in Cochin hospital. The originality of our approach is based on non-invasive test, since PBMC (Peripheral Blood Mononuclear Cells) from patient blood are the biological matrix for kinomic analysis. Finally, another approach is the identification of circulating protein biomarkers in response of targeted therapies (Thomas et al., 2014).

The Urologic cancer Program integrates 20 residents and 18 fellows each year. Weekly dedicated internal seminars are organized on both sites.

Medical and surgical teams are widely involved in the university teaching of urologic pathologies in University of Paris and in several national teaching degrees/master’s degrees in the field of oncology :

The selected following publications highlight the strength of clinical and translational research developed in the P4 Drug program: 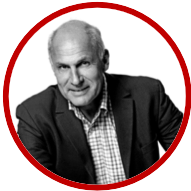